The U.S. Environmental Protection Agency issued a finding that carbon dioxide and other greenhouse gases pose a danger to the public, setting the stage for a battle over regulations that could have far-reaching impact on the U.S. economy.

Unless superceded by Congressional action, the EPA finding potentially could lead to a wave of regulations across the economy, putting stricter emissions limits on a wide range of enterprises from power plants and oil refineries to automobiles and cement makers.

What kind of nonsense is this?

E is a privately funded startup based in Amsterdam, the Netherlands. E started as a graduation project in January of 2006 and grew into a service to connect users and their online lifes to the real world. The letter E stands for whatever meaning the users would like it to have. E can be emotion. Evolution. Everybody. Everything.

Our team has grown from three founders to a group of lovely, and very talented individuals. Click on their photos to meet them.

I’m a sucker for useful applications of technology.
http://www.mynameise.com/reinkefj 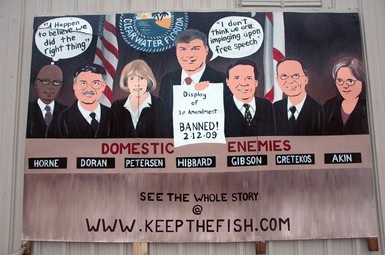 CLEARWATER, Fla. – A businessman outraged by perceived government attempts to silence free speech is turning the tables on city officials by posting a giant mural depicting their banning of the First Amendment.

You have to love an American that won’t “roll over” to the government!

Argh! Found Frau’s machine automagically rebooted to apply “fixes”. And, lost some of what was onscreen at the time.

Imagine if GE could turn off your refridge any time it wanted to apply “fixes”. Argh!